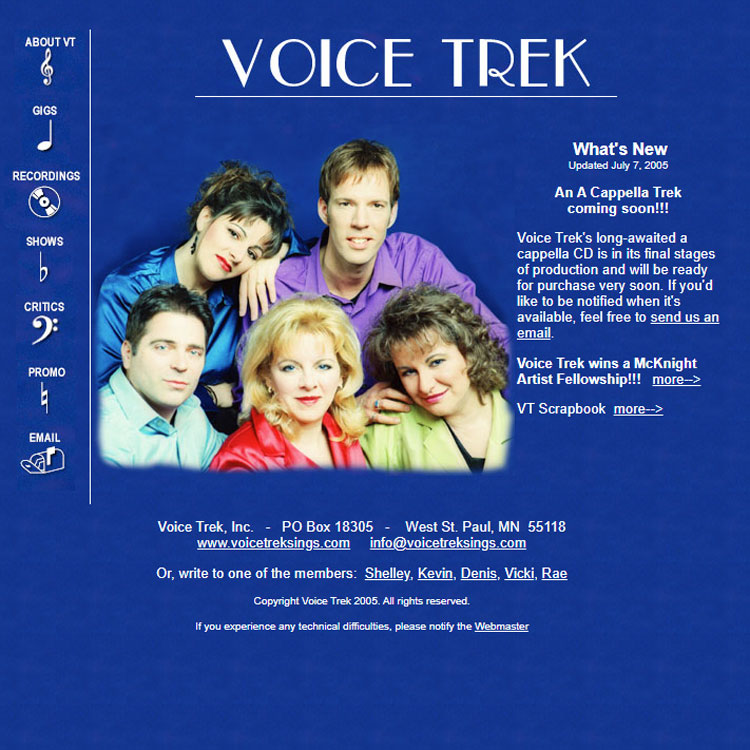 The original Voice Trek website the first, non-bank websites Michelle created. Developed in 2000, she did so as she was the soprano of the quintet which was made-up of three sisters, a brother-in-law, and an adopted brother

In 2005, it was time for a facelift, so she worked with the group to come up with a brand, select a color scheme, and gather information. At the time, Adobe Flash was all the rage for adding 'movement' to websites, so the site included fun hover movement on the main navigation, along with a Flash slideshow that played their music when the website was opened.

The website included information about VT, their discography and where their recordings could be purchased, forms to contact and book VT, as well as a 'buzz' section that included quotes from critics, educators, fellow artists, and presenters.

Over time, as Flash was phased out of browsers, Michelle swapped that functionality out for stand-a-lone images and hover links. She also added a media section for videos, as well as functionality to listen to clips from their recordings.

While the group disbanded due to kids, medical issues, and out-of-state moves, they have opted to keep the site for historic reasons. There are also plans to update the site since it is so old. We hope to include lots of old promo and tour photos. So stay tuned for the next trek!